Plumbing Services Advise What NOT to Put Into your Garbage Disposal

Posted on April 23rd, 2019 by Summit-admin
Plumbing Services Advise What NOT to Put Into your Garbage Disposal

What NOT to Put Into your Garbage Disposal

We would all like to think that our garbage disposer can handle everything. Unfortunately, physics just doesn’t work that way. Here’s a comprehensive list of what plumbing services suggest NOT to put down your sink, and why. Important disclaimer: just because an item is not included in this list does not mean you can assume it’s safe to put into the disposer. Read the operator’s manual and always use common sense.

Grease, Oil, & Fat Down the Drain 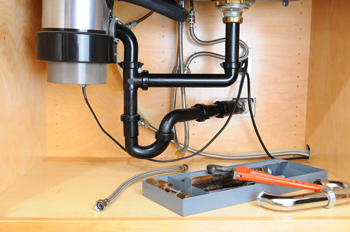 It might be out of sight for a while, but it certainly won’t be out of mind when your drain clogs up after repeated dumping. Never, ever dump grease, oil, or fat down your drain or garbage disposer. While it can work sometimes if you do it right, it’s not worth the risk. Wait for it to cool and put it in the trash.

Onion Layers and Veggies in the Sink

Layered bulbs and vegetables, especially those with film or skin-like characteristics, can wrap around blades and other moving parts, thereby hindering the movement of your garbage disposer motor. If enough builds up, it could cause damage down the road.

Egg Shells in the Disposer

Like onions, egg shells have a film-like membrane that can wrap around moving parts and potentially cause damage. Also, contrary to popular belief, they don’t sharpen blades, so there is no good reason to send them down your garbage disposer. Consider composting them instead.

Nuts & Shells in the Garbage Disposal

Nuts and shells (including seafood shells) are extremely hard. While some garbage disposers can handle the job, the blades will dull faster, and the lifespan of the unit will be reduced. Nuts and shells don’t take up that much space, so just throw them away.

Coffee Grounds Down the Drain

Pits or Seeds in the Sink

Not only are most pits and seeds too hard, but many are round. Small, hard, round objects don’t get ground up very well, and make a terrible racket as they bounce around. Save yourself the trouble and throw them out with the trash.

Animal Bones Down the Garbage Disposal

Bone is one of the strongest and hardest naturally-occurring substances known to man. Don’t allow animal bones to go down your garbage disposer. It might be tempting to get rid of them this way, but don’t do it. Some garbage disposer units can handle processing bones, but it will reduce their lifespan significantly.

Rice, Pasta, or Bread in Drain

What do these three things have in common? No matter how small they’re chopped, they still absorb massive amounts of water and expand. This expansion can block or clog your drains, which really is more trouble than it’s worth.

Stringy organic matter has this annoying habit of shredding wrapping around moving objects. Don’t put veggies like celery or asparagus down the garbage disposer as they are hard to grind. High-fiber fruits and vegetables can slow down your garbage disposer motor and coat everything with a layer of mushy gunk. Try to avoid sending these down the chute. A few here or there won’t hurt but keep at a minimum to preserve high quality operational use.

No matter what the substance is, too much of it can be a problem. Always feed your garbage disposer slowly. If you don’t, you risk putting too much stress on the motor, which can lead to it wearing out faster. A good rule of thumb is to make sure you never put more than a small handful down the chute at once. Also, make sure any large items are chopped into smaller, ice-cube sized pieces before you make the drop!

Harsh Chemicals in the Drain

Harsh chemicals are not the answer. If you’re trying to clean out the garbage disposer, pour a little dish soap and some ice cubes down. The ice will help clean off the blades and walls, and the dish soap will help break down any grease and oil (making it smell nicer at the same time).

Non-food Items in the Drain

Do you have a plumbing problem or are thinking about a bathroom remodel?